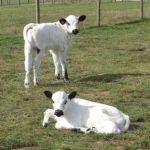 With a little help from the Childrens Farm staff, British White Cow Molly gave birth to a beautiful son on 15 August. Like so many births at Odds Farm Park, it happened nearby some lucky visitors on a day out with the kids.

The calf has been called William and, whilst fit and healthy, he is a bit smaller than usual at 65 cm and weighs 55 kg. Molly is doing a brilliant job of looking after him and both can currently be seen on your next family day out to Odds Farm Park.

After a smooth birth another British White heifer calf Wilma arrived on Tuesday 25 August in the early hours of the morning. Nine year old mum Jaunty has had many calves at this childrens farm before. One of Jaunty’s other daughters, 6 year old Libby, still lives as part of the herd at the farm and is being a fantastic big sister by helping to look after Wilma too. Wilma will also be joining the Odds Farm Park herd when she grows up. Plus with more calves still due, lucky visitors on a family day out might even see one born.

British White Cows date back to the sixteenth century and have direct links with the ancient wild white cattle of Great Britain. There are between 751-1500 breeding cows registered by the Rare Breed Survival Trust and all the British White Cows seen at this childrens farm on a day out are part of an active breeding programme.

Providing a great family day out, Odds Farm Park can be easily reached from Oxfordshire, Buckinghamshire, Berkshire, North London and West London. To arrange a day out with the kids, their family days out website is www.oddsfarm.co.uk