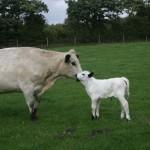 A British White calf, named Tiny, has just been born on 9 September 2008 at Odds Farm Park. Proud mother Molly was born at Odds Farm Park in 2004. Little girl Tiny is Molly’s 3rd calf at Odds Farm Park.
The Rare Breed Survival Trust has strengthened the British White breed to now recognise it as a Minority rather than an Endangered breed. The earliest recorded herd was kept in the “Lords Park” at Whalley Abbey, Lancashire. They are one of Britain’s oldest breed of cattle with a history going back more than 800 years. They were kept mainly as dairy cows up until 1960’s. Now they are mainly used as beef cows. They have white bodies with black points, which make them very attractive and also reduces the risk of sunburn. They can live for 15 to 25 years.