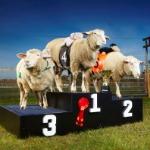 With the release of the 2013 Guinness World Record Book yesterday – 13th September 2012 – family day out favourite Odds Farm Park is pleased to announce that one of their Racing Sheep is an Official World Record Holder!

Making Page 63 of the book, Freisland /Dorset Down male Lamborghini is the current holder of “The Most Races Won by a Sheep”, having won 165 out of 179 total season races in 2011!

Visitors to the children’s farm will be interested to learn that what makes this record even more of a considerable achievement is the fact that only 8% of World Records are entered into the book every year!

All the staff at the farm were aware that their racing sheep were fast but Lamborghini stood out from the rest! They are absolutely delighted that Lamborghini has been included in the Guinness Book of World Records!

Lamborghini was born at the farm in January 2011 and took to racing immediately, winning his first race in April 2011. He loved the sound of the crowds and always carried the same Jockey on his back – a soft toy pig called Del Trotter. He is currently retired and living life to the full in the paddocks at Odds Farm Park.

Elsewhere at Odds Farm Park, people on a day out can expect more exciting activities – board Tractor & Trailer Rides (until the end of October Half Term – weather permitting), race Go Karts and meet the Farmers and hand-feed furry friends in the large Undercover Animal Barns. Combined with a jam-packed Animal Activity and Demonstration Programme, there’s so much to do!