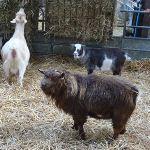 It’s very exciting at children’s farm Odds Farm Park because, as well as preparing for Spring lambing, the staff have put the billy goats in with the nanny goats in the hope of having even more new arrivals next year.

Pygmy goats originated in the Cameroon Valley of West Africa. They were imported into the United States from European zoos in the 1950s for use in zoos as well as research animals. They were eventually acquired by private breeders and quickly gained popularity as pets and exhibition animals due to their good-natured personalities, friendliness and hardy constitution. 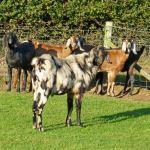 The Anglo Nubian goat was created in the UK at the end of the Nineteenth Century. The breed was developed by crossing goats in England with those arriving on Ocean Liners from the East. Anglo Nubian goats are renowned for creating the best tasting and highest quality goat’s milk.

Award winning kid’s farm Odds Farm Park provides a fantastic day out for all the family and is easily reached from West London, London, Berkshire, North London, Buckinghamshire and Oxford. It is very close to Maidenhead, Marlow, Uxbridge and Beaconsfield. For more information, directions and prices visit the family days out website www.oddsfarm.co.uk