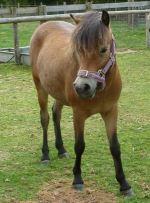 Visitors to the family day out favourite will love to meet 1 year old Celestia, who came to Odds Farm from an Exmoor breeder in Hertfordshire. Visitors on a day out will see that Celestia is a very pretty pony and very friendly too! She is now living with the farm’s Shetland ponies in the paddocks and can be seen by visitors on a day out.

The Exmoor pony has inhabited the Exmoor moorland since ancient times and is the oldest British pony. Exmoor is situated in the south west of Britain and is an area of high moorland providing a varied diet of moor grasses, rushes, heather and gorse.

Exmoor ponies are a rare breed with less than 1000 worldwide and are “endangered” on the Rare Breeds Survival Trust list. There are just 300 breeding mares producing 130 foals annually, 150 of the mares are still living free on Exmoor and the remainder throughout Britain.